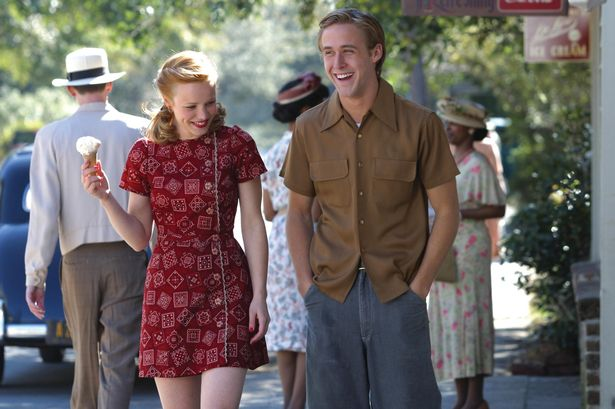 The Notebook is the most successful Nicholas Sparks adaptation. Released in October of 2004, The Notebook is everyone’s go-to romance/drama movie; it’s certainly one of mine. Fortunately, The Notebook had such a successful release and made such an impact on the romance genre as it one of the biggest genres filled with thousands of romances. In my review, I will discuss some details about the author of the successful novel, the director, my thoughts on the ultimate romance movie and, some interesting facts.

The decade-long classic is based on a truly challenging romance between Allie (Rachel McAdams) and Noah (Ryan Gosling) narrated at the present day by an elderly gentleman reading to a woman with Alzheimer’s in their shared nursing home. It is a classic romance film that nearly everyone I’ve spoken to has seen, as it includes romance, heartbreak, and plenty of tears. This making it a go-to when wanting to cry and fulfill the ultimate romance wishes.

The Notebook was firstly a romance novel written by Nicholas Sparks also known for, The Best of Me, The Longest Ride, Dear John, and many others. The Notebook is Sparks first published novel and his most successful; when the film adaptation was released it earned $13 million in the US on opening weekend and $116 million worldwide. Spark’s novel was based on a true story about a couple he knew and, in the book gave the character of Allie a much smaller part in comparison to the film.

Nick Cassavetes is the Director of The Notebook and was not the first choice to direct. Many other directors were considered for the job including Steven Spielberg, Jim Sheridan, and Martin Campbell but it was Cassavetes who took on the role. Cassavetes had quite the job of adapting a novel to a screenplay and whilst to some, it’s a go-to on the weekend for others it lacks passion. When researching the film I came across a few times when people were unhappy about the direction and the adapted screenplay written by Jan Sardi and Jeremy Leven due to unimaginative and cliche characters and plots.

My personal opinion on the film varies. I cannot stand watching a movie I find to either be cliche or cringe. With The Notebook, I did not find this. The plot I can understand sounds basic than is viewed, I feel the screenplay may be more cliche than the actual direction and production not to mention the amazing actors and actresses playing their roles. The entire plot does live up to expectations and has some emotional moments. I love sitting down and watching this movie. It tells a romantic story and although follows some cliche material it doesn’t feel like something I’ve seen a million times before, it’s a beautifully told story and I love it.

To conclude my review I want to share some interesting facts I found whilst researching. The American Composer Aaron Zigman was responsible for the amazing soundtrack behind The Notebook, and this wasn’t his first Sparks movie. Zigman has gone on to write the soundtrack to, The Best of Me and The Last Song. One of the most crucial moments in the film is when Noah and Allie argue about what she wants, creating one of the most iconic scenes in the film which is read differently on the script than to how Gosling said it. Gosling’s emotions carried this scene and he managed to improvise the best lines in the entire film. I love watching romance movies, and The Notebook will always be top of my list.