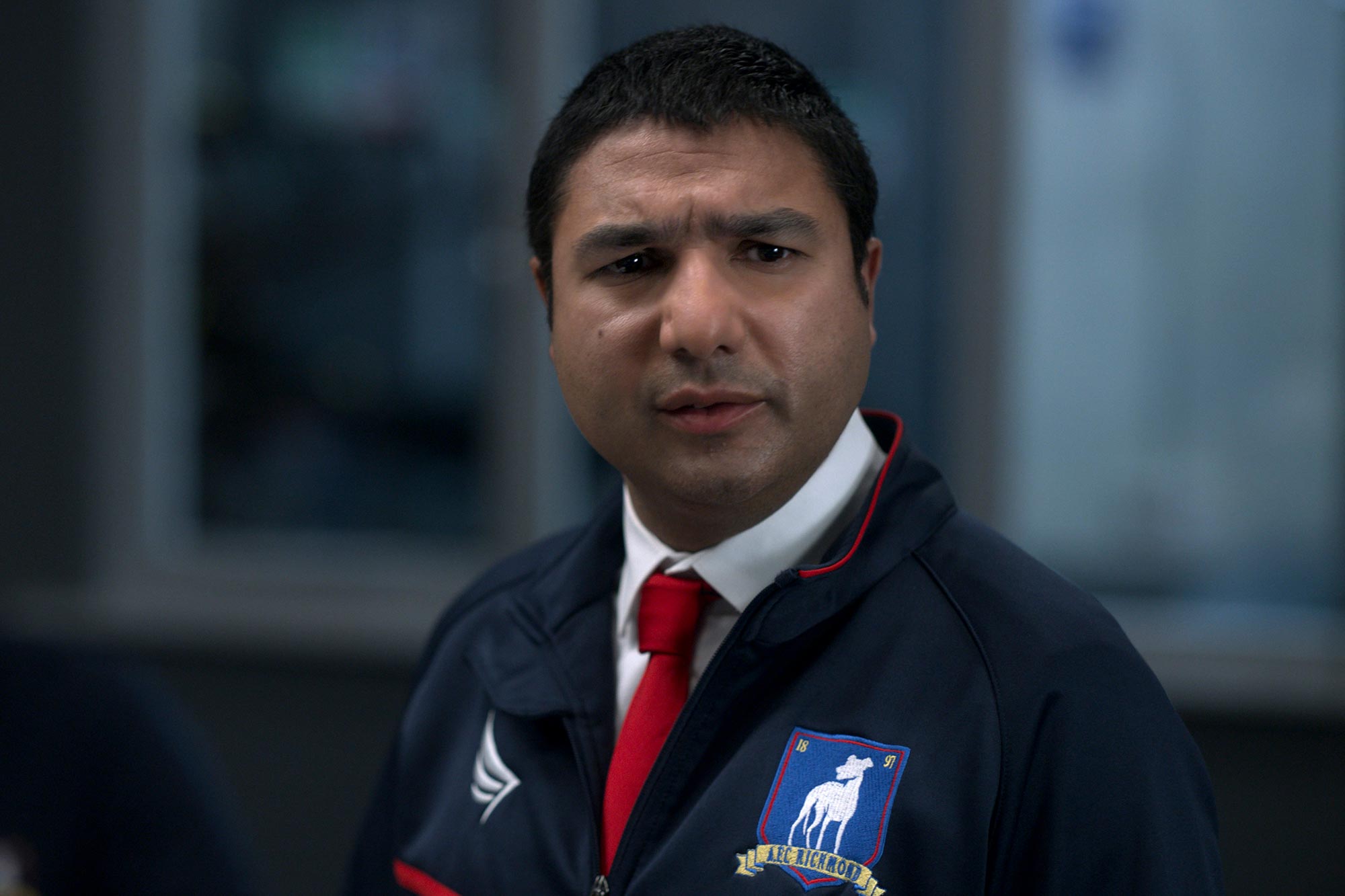 “I suppose the best brand is just being yourself.”—Higgins

We’re past Christmas, but things aren’t all cheery for our favorite gang from AFC Richmond. We begin with Nate (Nick Mohammed) looking at a beautiful table in the window of a local Greek restaurant. It’s his parents’ 35th anniversary, and Nate wants to book them a table. He heads in to inquire but soon realizes he doesn’t have enough cache, or assertiveness, to lock in his desired reservation. It’s soon clear the big story here is going to be people finding their true selves, and that begins with Nate.

We quickly swing over to Roy Kent (Brett Goldstein) on his show being grilled about the lackluster play from Richmond’s new captain, Isaac (Kola Bokinni). And a bit later, we see Rebecca (Hannah Waddingham) is wading into the world of dating apps but trying to figure out how to present herself. More on those threads in a moment.

Nate has had an interesting season. Sometimes he’s seemed as if it’s going to his head, but as this episode plays out it’s clear that stems from a lack of confidence. He’s a coach but he doesn’t feel like a leader. When Nate offers to help Isaac find his confidence, he’s quickly rebuffed by Ted (Jason Sudeikis). When he tries to grab a free Nespresso machine, Keeley (Juno Temple) tells him quickly those aren’t for him. Nate feels the loss of power.

Soon, he turns to Keeley and, eventually, Rebecca for advice. They try to help him find his voice as he prepares to return to the restaurant, this time with his parents in tow. Upon returning, Nate’s goal of getting the prime table is initially rebuffed. He gathers himself and first tries to do what Rebecca does to gain confidence, but it doesn’t fit. Finally, he settles on leaning into what makes him a compelling part of the Richmond squad, which sways the hostess and earns the table. Nate has found his swagger, at least for now. More on that in a minute.

As Ted leads a review of the last game, a loss, it’s clear Isaac is pressing. Ted tries to lighten the burden by sharing his love for Romantic Comedies, which led to the biggest Pop Culture name drop in the show’s history and provides the thematic context for much of the rest of the episode. Ted’s charm works on everyone but Isaac. He realizes he needs a bigger gun, so Ted turns to Roy.

After waiting all season to get to spend time with Roy, Ted tracks him down thanks to a tip from Keeley. Over an impromptu meal, Ted asks Roy to help Isaac and tries to entice him to return to Richmond as a coach. Roy rebuffs the offer but comes up with a way to reach Isaac. Ted makes another pitch for Roy to re-join the team but again Roy rebuffs him. Still, the seed is planted.

Rebecca is using a pair of apps, Keeley’s Bantr offering and another called Tumescent that appears to take a decidedly more risqué approach to the interaction. She’s found someone on Bantr she connects with but she’s leery of revealing herself. Keeley talks about needing to build a brand, but it’s a later interaction with Higgins that gives her true insight. Higgins shares the story of how he met his wife and adds the advice in the quote up top. It spurs Rebecca to open up to her mystery man in a new way.

But as she’s sending a message in Bantr, we cut to Ted walking out of the tunnel on his own phone, seeing a message and smiling. Could these two be making an anonymous connection? It’s certainly a hint being dropped but it could be a red herring. Fans supposedly want to see them together, but I’m not sold… yet. More to come on this in future episodes I’d assume.

As Ted is hanging in the hall way, Nate, looking dapper in a game day suit, makes his way out to the pitch. He’s found his confidence. Out on the pitch, a looser Isaac is cutting it up with teammates and coaches, ready to embrace the fun of the game again. And in the studio, Roy sees it all and finally realizes where he’s meant to be. In true Rom-Com fashion, Roy walks out on the live broadcast, makes it to the stadium, finds a way to get to the field and is warmly welcomed by Ted. He’s back where he’s meant to be.

But it turns out not everyone is thrilled, as we see Roy nearly in tears at being back Nate’s newfound confidence seems on the verge of evaporating. But that’s a challenge for another day.

There’s a few good ones here, but I’m going with the final sequence, as Roy Kent struggles to make his way back to the stadium and finally claims the secret tickets Ted has left there for him every game. When he emerges from the tunnel on to the field the crowd cheers, Keeley smiles from up in the box and all feels right in the world.

Look, I’m only human. There were SO MANY in such tight windows here, and it’s also possible I missed an homage or two. But brace yourself.

This is a tough call, but I’m going with Nate. He was the focal point of the episode and got his biggest share of the story this season. He was one of my favorites from the first season and I liked seeing him find a bit of the approach that made him so endearing. I fear it won’t last long given where we ended but I’m still team Nate.

That’s a wrap on Rainbow. Come back next week as we discuss the sixth episode, The Signal.