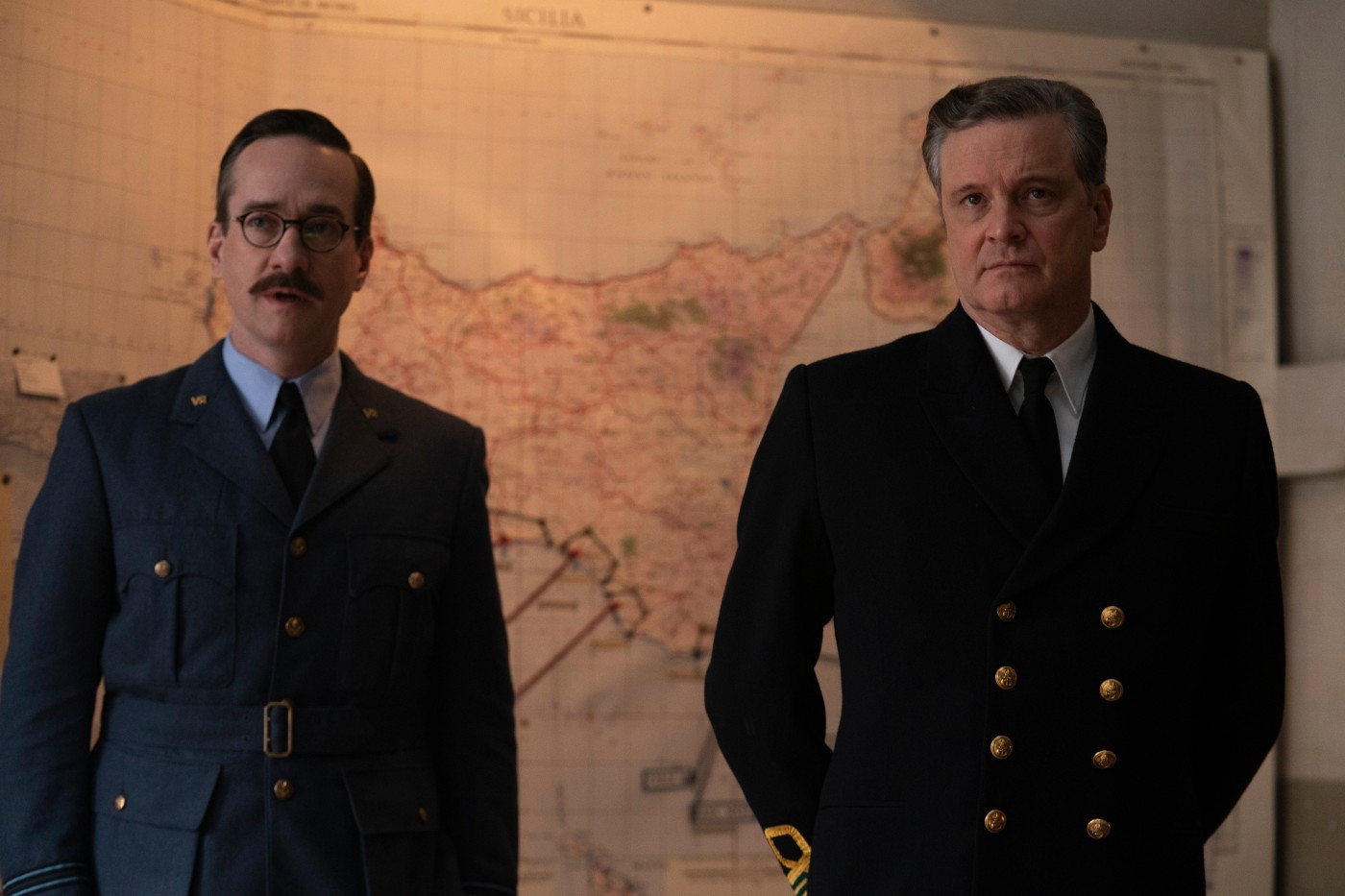 In 1943, during the height of the Second World War, it seemed as though the German forces were a step ahead of everyone. The British forces needed to divert the German army away from Sicily to ensure the invasion would be a success for the Allied forces. Officers Ewen Montagu (Colin Firth) and Charles Cholmondeley (Matthew Macfadyen) devise a plan to have false British reports fall right into the hands of the German forces by way of a dead body landing on the beach of Spain.

When it comes to historical movies, World War II is one of the most discussed and explored periods. There is a villain, there is a goal, and there is a “happy ending” that makes this time frame one of the easiest to adapt, but also one of the most engaging. For a film to truly break through and become something more than an average WWII movie it needs to find a different angle of approach when it comes to the subject matter.

Operation Mincemeat tries to find that other angle but is mostly unfocused in the story it is trying to tell. When the film centers on the Operation, it is engaging. Early on there is a good amount of time building a backstory for the body of Glyndwr Michael, now William Martin, that will transport these false reports right into the hands of the enemies. These moments allowed the audience to engage with the story as a whole. Building a life for a lifeless body allowed the British officers to turn a dead man into a war hero. There is little known of the life Glyndwr Michael lived before this mission, other than a brief run-in with his sister, but there is an entire world built for William Martin.

A world that includes hobbies, dreams, and true love for his girl Pam – another fictional character in Martin’s world based on Jean Leslie (Kelly Macdonald). Building this world for William Martin was easily the best part of the movie because it allowed the audience to care for this body. Michelle Ashford’s script was able to develop a lifeless body into the hero he wound up being. That can’t be said for the rest of the characters as an odd romance arc between the characters deters them from any real growth.

The trio of Mantagu, Cholmondeley, and Leslie go through the process of building and creating one of the most important fictional characters in British history, and are too caught up with jealousy and infidelity to fully grasp what they are exactly trying to accomplish. Firth, Macfadyen, and Macdonald are all good on their own but rarely do they work well together as there isn’t much chemistry between the three of them causing most of their scenes to feel as lifeless as Glyndwr Michael’s body. I never felt any sort of romantic spark between Firth’s Mantagu and Macdonald’s Leslie, and Macfadyen’s Cholmondeley didn’t have a connection really with anyone in the film, other than maybe Jason Isaacs Admiral John Godfrey.

Going through what had to have been one of the most stressful, risky, and important moments in Britain’s WWII fight, you would have thought there was a different storyline to cover than a romantic one. Throughout the movie, there are talks about Ewen Montagu’s brother, Ivor Montagu (Mark Gatiss), as a potential Russian spy. This was a storyline that I felt could have been more expanded on and would have caused more internal struggle for Firth’s Montagu rather than a love plot.

Operation Mincemeat is an interesting story told without much focus. There is a really good movie within this story, but it has to deal more with the actual Operation rather than the love triangle behind the scenes. When a topic is as touched upon as World War II, it is important to find new and untold stories and bring them to light. Operation Mincemeat could have been just that, and while the film does still work as a glance into one of the more interesting moments in British history, it only scratches the surface of what it could have been.