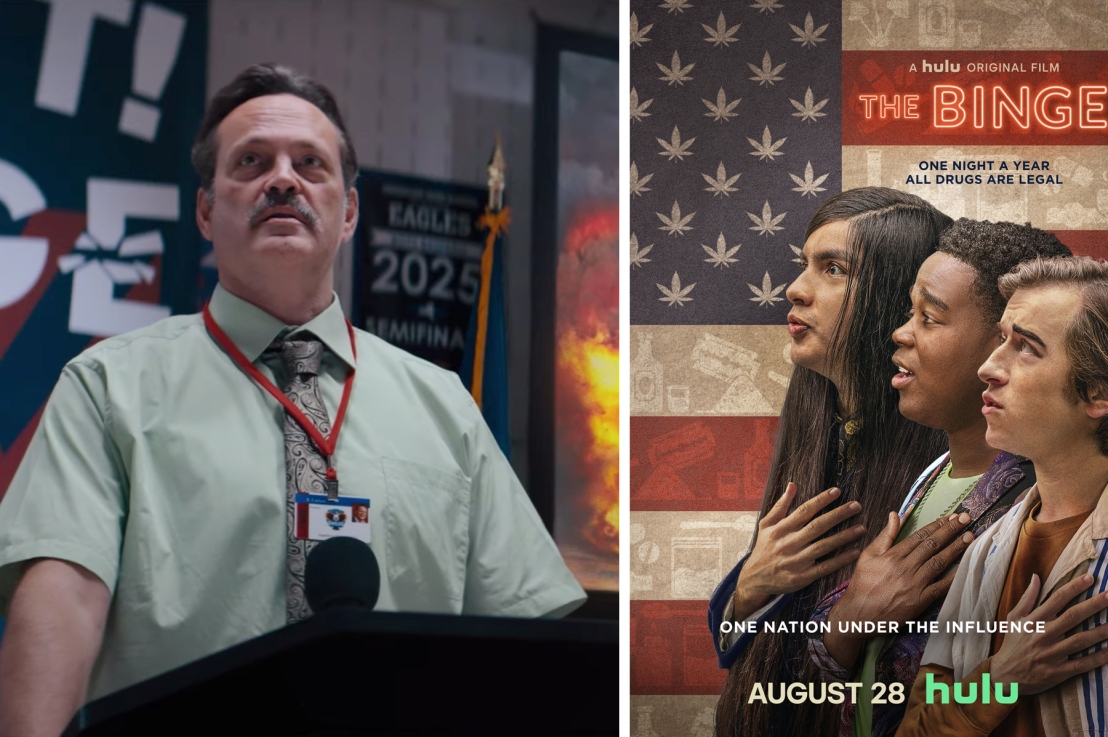 Welcome to another edition of the “The Valero Verdict” movie review. In this, I will give you a quick movie review with a couple of bullet points of which I either liked or disliked. I will end the review with a rating of the movie and short overall thoughts.

On the docket today, the Hulu Original film, The Binge.

I had the pleasure of sitting down with the writer of the film Jordan VanDina. Take a listen here.

Set in a time where all drugs and alcohol are illegal, the only day anyone can participate in the “fun” is on Binge day.

We get the narration of what exactly “The Binge” is, which is the one day of the year you are allowed to do Drugs and Alcohol as they are banned the rest of the year. I loved the fact that this is Morgan Freeman narrating this over the top of the scene.

The convincing of Griffin to participate in the binge is what sets us up for the rest of the movie. We witness some hilarious events which include these guys using a party pedal bike to travel down the road to run away, and it’s laughing out loud funny. We get a couple of one-liners along that way that makes you laugh as well including, the line ‘We’ve got ten seats, eleven if you count my face’. As we transition, Griffin is all in on The Binge because he wants to ask the principal’s daughter to the Prom.

Speaking of Principal Carlsen, played by Vince Vaughn, and this was the perfect role for him. He was this off the wall funny ‘party pooper’ that made you laugh with his hilarious delivery of every line. The writing here was smart because they wrote him in a way that you didn’t like him, but his lines were written to make you love to hate him at the same time. This was the most fun I’ve had watching Vaughn in a film in a long time.

Hitting the final stretch, we get our typical rift between friends, which I would’ve been mad BUT this one was written to perfection. They spin this rift into a musical number in the middle of it, and it was downright delightful. It was out of the blue, different, and just hilarious. I can’t express enough how much of a breath of fresh air this sequence was.

The film brings it all together in a way that makes it feel different from most comedies. The writers and director did a great job of utilizing things that transpired earlier in the film and bringing them full circle to close out the film.

This is one of those films you will turn on randomly again and again over the next couple of years. It’s funny, has a solid story, and it makes you invest in what is happening. I gave the film an extra star based on the Musical Number alone.

Subscribe to the Music City Drive-In podcast on all your favorite Podcasting apps. Check it out here

Tell me what you thought of the movie, hit me up on here or talk to me on Twitter @RickyValero_