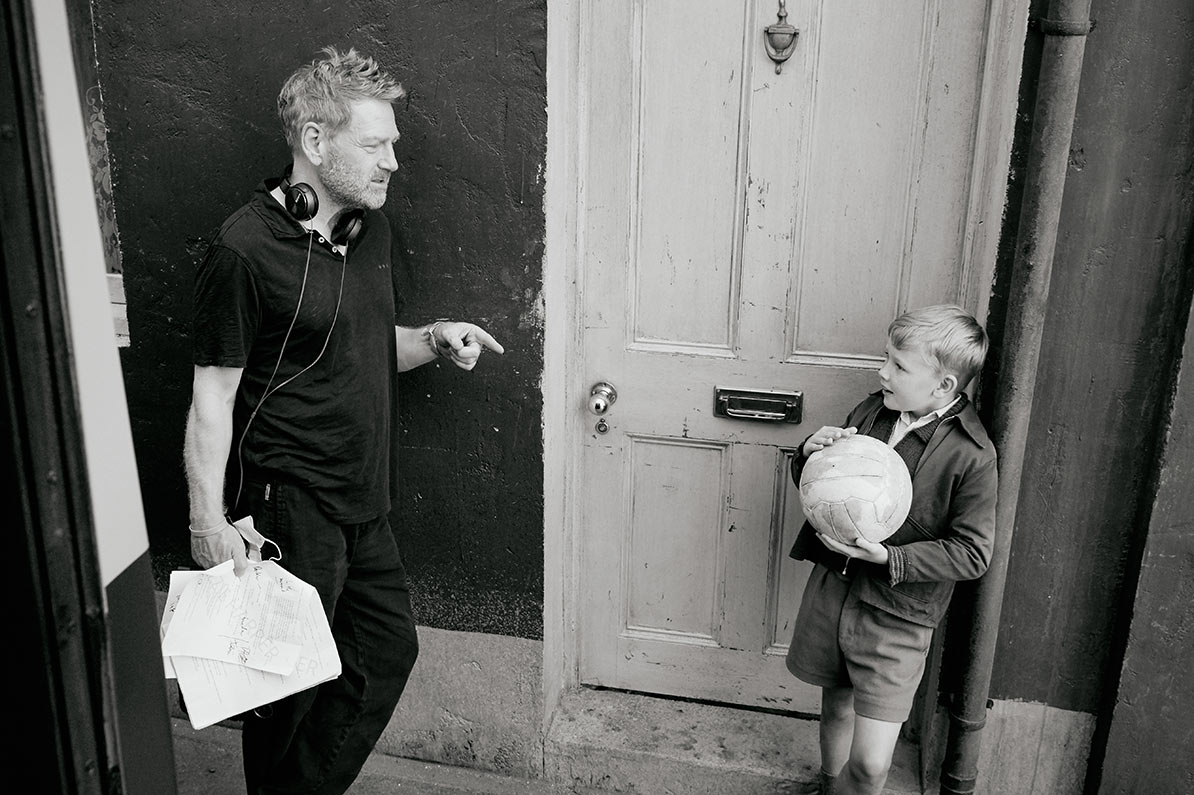 Kenneth Branagh is back and he might just be headed towards the Academy Awards again, after a ten year absence. Branagh is best known for his Shakespeare adaptations, like Hamlet and Much Ado About Nothing, and his franchise work that has spanned from Disney to the Harry Potter films. He’s had a lengthy career as an actor, writer, and director working in film, television, and theatre.

Branagh has a knack for alternating between doing commercial projects and passion projects. While some of those commercial projects end up being a success, like his Cinderella live action film in 2015, others miss the mark. Yes, that’s a reference to last year’s Artemis Fowl.

Over recent years, Branagh hasn’t had any projects that seemed like real Oscar contenders. Only Cinderella, widely considered as one of the best of the Disney live action remakes, was able to score an Oscar nomination (for Costume Design).

With Murder on the Orient Express in 2017, Branagh opened up a new franchise with himself in the role of Agatha Christie’s famous detective Hercule Poirot. Though it didn’t get any awards buzz, it did well enough to greenlight a second film. However, Death on the Nile’s release has been pushed several times due to COVID – and to its unfortunate inclusion of (very controversial) Armie Hammer in the cast. The film is now set to come out in 2022.

In 2018, Branagh released All is True, in which he played an aging William Shakespeare in addition to directing. The film didn’t make a splash at the box office or with awards, but it was clearly a passion project for a man who has dedicated much of his career to the Bard’s work. Most recently, Branagh directed Artemis Fowl, which was released onto Disney Plus last year during the pandemic. A disappointing adaption of the children’s novel, the film felt like an obvious cash grab for the director who didn’t seem to put in that much effort, most likely already dedicating his creative powers to Belfast.

Branagh’s also kept busy over the past years when he’s not directing films. He portrayed Commander Bolton in Dunkirk in 2017 and Andrei Sator in last year’s Tenet. Branagh took over as president of the Royal Academy of Dramatic Arts in 2015, where he did his own training years before. He continues to be involved in the London theatre scene and directed Tom Hiddleston in a production of Hamlet to benefit RADA in 2017. Earlier this year, he was meant to direct and star in a theatre production in London, but it was cancelled due to complications because of COVID.

With Belfast, Branagh has created something special and unique from the rest of his recent work. The film, which releases on November 12, was written and directed by Branagh who drew inspiration from his own childhood. It is about a young boy growing up in the late 1960s in Belfast in a working class family. Branagh said, “It’s about coming home – a dramatic journey of excitement, emotion, and humor.” The film is being released by Focus Features, who had luck last year ushering their Promising Young Woman to nominations, and stars Caitriona Balfe, Judi Dench, Jamie Dornan, Ciaran Hinds, and Jude Hill.

The early reactions to Belfast from the Telluride and Toronto film festivals have been encouraging. The film currently holds a 100% fresh score on Rotten Tomatoes, though it only has six reviews logged. It’s likely to continue to hold a fairly high score though, as even the critics who aren’t raving about the film still have been overall positive on it.

On Twitter, Jazz Tangcay referred to the film as “a triumphant beauty.” Leah Greenblatt, in her review for Entertainment Weekly, gave the film a B- and called it “a soft-focus Irish fairy tale bathed in love and blarney and a whole lot of warbling Van Morrison.” Monica Castillo for The Playlist said that the film is “one that may stick with moviegoers for quite some time after the credits roll” and gave it an A.

Peter Hammond for Deadline said, “Branagh has revisited his own past and made a film that resonates in much the same way yet another current film, CODA, also does in reminding us that despite whatever hardships, family is always there to get us through.” He further elaborated that Belfast is “one of the year’s best movies, no doubt.”

So…does this mean that Branagh is destined to return to the Academy Awards this year? Currently, it seems likely though not guaranteed. At the time of writing this, the experts on Gold Derby had Belfast sitting at #10 for Best Picture and Branagh at #7 for Best Director. Granted, some of the films higher on their lists are still unseen and thus, the race is still very much in flux.

Eve O’Dea at Next Best Picture evaluated Belfast’s Oscar chances, noting that the film could possibly score acting and cinematography nominations which would help its chances in Best Film and Best Director. It would certainly be a triumph for Branagh to receive his second nomination for Best Director, over thirty years after his previous one.

Belfast also marks the first film that Branagh has written since The Magic Flute in 2006. While by no means guaranteed, he’s certainly in the running for a Best Original Screenplay nomination as well. But whether or not Belfast is successful at the Oscars or any other awards show, it’s a clear sign that Branagh still has that talent that we’ve seen before from him. (And Artemis Fowl was a fluke.)

What will this mean for him in the future? Other than playing Boris Johnson in the upcoming 2022 television series, This Sceptred Isle, he doesn’t have any announced projects. Could he return to his Shakespearean roots or make another drama like Belfast? Or will he choose to take on more franchise work or return to the theatre? Whatever Branagh does next, Belfast has proven that he still is capable of making a great film.