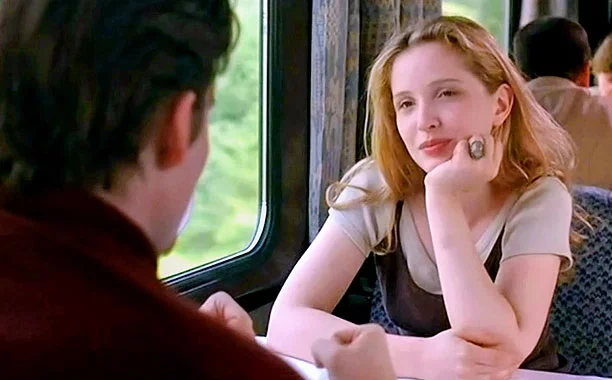 Before Sunrise, marked as an ‘indie classic’ made its way into 90’s cinema with its honest interpretation of love presented within the romance genre. Richard Linklater gave himself the challenge of taking on a real experience he had whilst in Philadelphia and turning that into Before Sunrise. When writing a review on romance films it’s easy to distract from the dialogue and only focus on what’s presented to the viewer visually. Before Sunrise strips back and gives you a simple story of what happens when boy meets girl.

Following the story of Jesse (Ethan Hawke), a young American man travelling to Vienna to return home from him travels in Europe meets a young French woman, Celine (Julie Delpy) also on the same train as him heading back home to France before deciding to spend the day together in Vienna before Jesse must catch his flight. The ultimate meet-cute is presented through a simple tale of how only a short few hours can result in such a positive experience.

The entire film lacks this use of clever editing in a way that is redeemable because of how sophisticatedly the film flows. The plot is about these two characters having only a short amount of time to spend together and this is perfectly presented as is, completely chronologically without any disruptions. I learnt that the film was shot in chronological order and much effort went into creating the perfect scenes. I love the simplicity of the scenes and I do believe with a film as well written as it is that you have to stop yourself from absorbing fully into the centre frame. When watching films myself I love just taking a step back and appreciating the entire shot used, as I love trying to understand why the Director and crew choose these specific places to locate and shoot. Luckily with Before sunrise, the location was amazing and we got to take it all in especially with the beautiful scene of the pair sitting on a wall with the sunrise behind them which uses a spectacular viewpoint.

One of my favourite things about the film as for many has to be the incredible use of dialogue. As I mentioned previously it’s easy as a general watcher and as a reviewer to distract from the dialogue and only focus on what’s visually presented especially as the romance genre struggles with clichés’. Before Sunrise is one of the most honest films I’ve seen. Its raw presentation is completely understandable and easy to follow, you are not only watching a ‘boy meets girl’ but you’re invested in the ‘what will happen?’ aspect of the film. In my research I found that both Director and Writer, Richard Linklater had the inspiration for this inspiring love story from his own travels; Linklater met a woman whilst in Philadelphia shopping and when the two began talking Linklater asked if she was around to walk around the city with him in which she accepted. Basing a film on one’s own experiences is an amazing opportunity, to say the least, and having this become more than a film but a trilogy branded an “indie classic” is inspirational.

Casting the role of both Jesse and Celine was challenging as they had thousands of people coming in and out auditioning for these main roles; however, they managed to narrow this down to two people per role. For the role of Celine, it was narrowed to Sadie Frost and Julie Delpy and for the role of Jesse, it was down to Ethan Hawke and Michael Vartan. I bring this to the attention of the reader as I do believe this also to be a highlight of the film. Before Sunrise was about two people and those two people only so to cast these roles wrong would have completely changed the film and it’s dynamic. Director Linklater stated he made the final decision as both Ethan and Julie had great chemistry together. The roles casted were impeccable, I could not imagine the roles any differently. This being said both actors had an immense role on their hands as they played a major part in the pre-production of the film, that meant working on making the script fit for them and the Director’s vision.

I truly believe Before Sunrise is a masterpiece in its own talented ways. The deep dialogue and realism is something one can only aspire to when writing a script. As well as this, drawing from own experiences is proven to be nothing short of an inspiration to those who have a unique story of their own and have wonderfully expressed it through the film lens. I think as an audience we are challenged to believe such realism being presented through this incredible love story that’s not only about the connection of the two characters but about the connection the actors have in order to present us with a fictional romance that leaves us viewers in positive disbelief of a love so pure.

Before Sunrise was on my watchlist for many months before finally giving in after hearing nothing but positives from my close friend. After watching I remember being taken back and taking a few moments to evaluate what I just watched. This led me to the conclusion of my thoughts. I’m a sucker for a romance film and love watching the ones that will surprise me and this was definitely that. Before Sunrise uses these classic romance techniques that have been used in films for decades and brings us a simple but endearing plot most wish they could de-fictionalise. It’s a realistic story of how a simple meet-cute can change your life. I loved it.