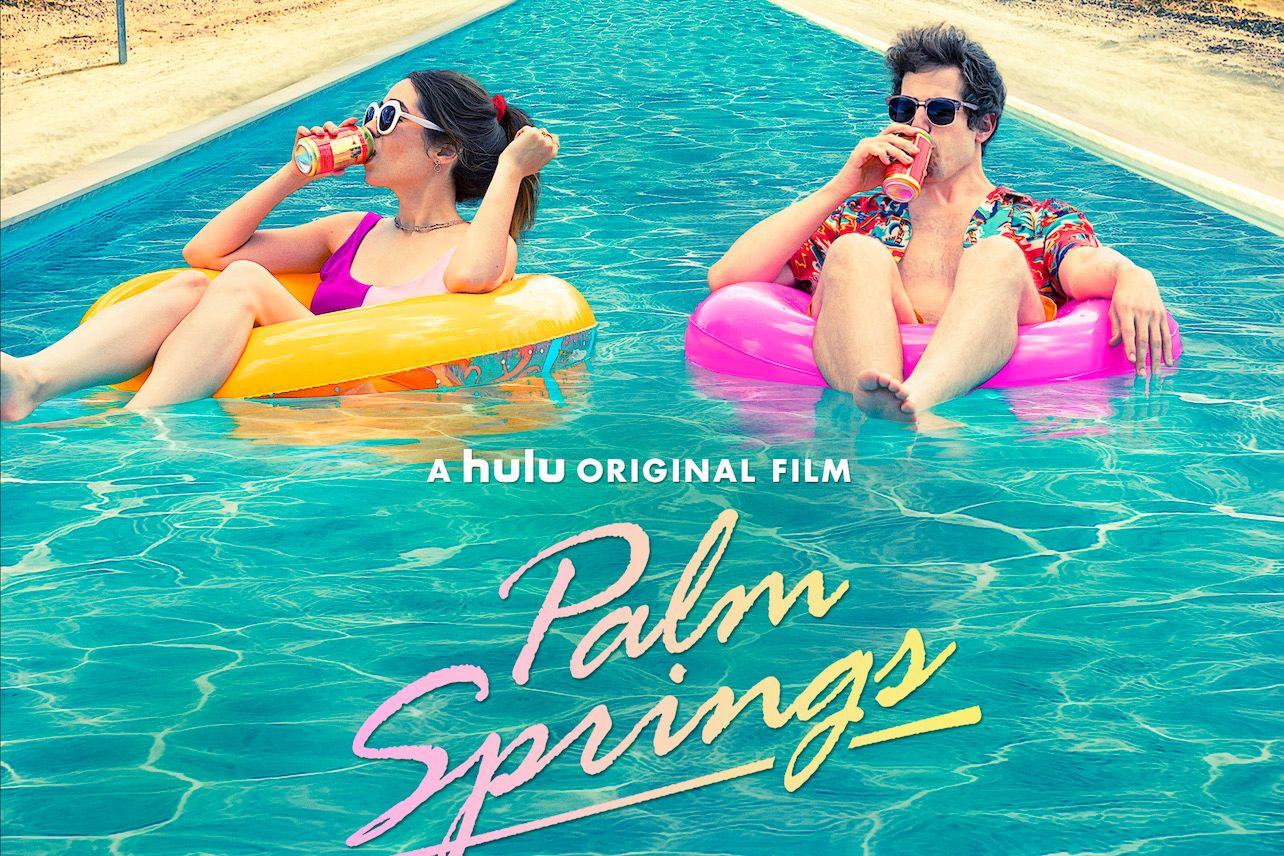 Synopsis: When carefree Nyles and reluctant maid of honor Sarah have a chance encounter at a Palm Springs wedding, things get complicated as they are unable to escape the venue, themselves, or each other.

Sometimes the best movies tell a simple story in the most elegant of ways. Of course, it is always important to relay societal issues and messages, and it is always fascinating when a movie can make you stop and think about the world you’re living in. However, sometimes it is a breath of fresh air to think about the world you are trapped in, and if that world means something. I am not saying Palm Springs has the answer to life itself, but it is a testament to keep living and making the most out of every situation.

The premise surrounding this film is nothing new. It is nothing that wasn’t coined by Groundhog Day and built upon over the following years. I mean, whenever a movie like this is released people immediately go to Groundhog Day. While this “Live, Die, Repeat” style of movie has been done plenty of times before, all of those films follow the same structure of trying to find a way out of the loop. Films have succeeded and others have failed, but ultimately the “genre” itself has become stuck in a loop of repeating the same formulaic structure of finding an out of the constant loop.

And while Palm Springs does eventually get to that conclusion, it doesn’t spend the entirety of its 90-minute runtime focusing on that conclusion. Instead, Nyles (Andy Samberg) and Sarah (Cristin Milioti) would rather focus on living every day, rather than dying for a way out. In this way, they are able to, for a while, come to peace with their situation and live a carefree and adventurous life.

Andy Siara’s work on this script is unlike anything you will see all year. A very Charlie Kaufman-Esque script that is genius in the way he was able to take an old and worn out concept, and completely make it fresh and new. It was charming and sad, while also being one of the funniest movies of the entire year. This script should get awards love come awards season. The movie was paced with an effortless amount of energy that never made me feel tired or worn out, and the performances took their “live every day” subtext to heart.

Andy Samberg is one of those actors I grew up with. He hit me at just the right time as Hot Rod and his SNL skits were released when I was in middle/high school. He has always had a knack for laugh out loud humor that was geared toward high schoolers who could find a cheap laugh anywhere. Even his most recent major work before this, Popstar: Never Stop, Never Stopping, was built around grotesque laugh out loud moments that were geared specifically for a certain group of people. Here, he is something different. He turns the charm up and finds humor in one of the direst of situations. He is brilliant here as with every move in his “life is meaningless” facade.

And Cristin Milioti is right on par with him. While she isn’t the main focus of the movie, she is the driving force that continuously pushes Nyles. She gives him life and she becomes the meaning in Nyles’ meaningless life. The chemistry between the two is excellent as you can really feel their love blossom and grow over the course of the movie. When it comes to the rest of the cast they, for good reason, really aren’t given that much to do. That is other than J.K. Simmons who is really off the wall in this movie. His performance is something insane, but he also manages to give us one of the most tender and beautiful moments of the entire movie.

Life isn’t meaningless. Not when you find something to live for. This movie is about finding that place of peace and serenity. The moment in time where you can always return, and the person you want to return with. A moment in the backyard of Roy’s (J.K. Simmons) house tells us that. Life is a beautiful mess that is constantly searching for meaning. This movie shows us that until you can live vicariously through someone else, you need to keep searching for that meaning, cause it is out there. Maybe I thought deeper into this funny rom-com then I should have, but this movie really struck something with me.

Final: Sometimes the most simple stories can have the most beautiful of journies. Palm Springs doesn’t reinvent the wheel but instead changes the path of the “Groundhog Day” style of movie into a beautiful look at life and meaning. The script is beautiful and deserves awards recognition. Andy Samberg has never been better and Milioti and Simmons provide so much humor and heart to this film. Just like the premise of the movie, I cannot wait to watch this again and again and again.