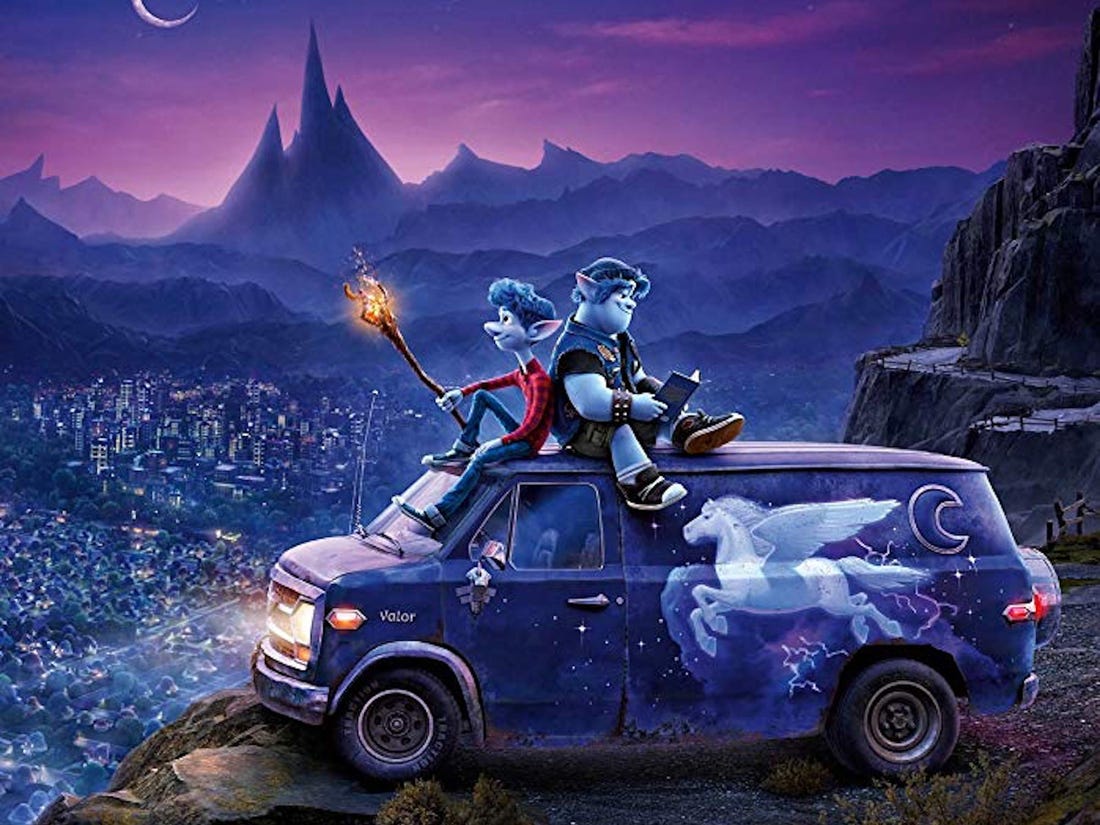 Synopsis: Two young brothers have to find the spell to bring the rest of their father back.

2019 gave us a year of animated films that were, in my opinion, pretty lackluster. The year hinged on reboots and sequels and the original content was brushed to the side for an epilogue Toy Story film and Frozen II. There was original content amongst those blockbusters, but they did not get their due until a shocking awards season run.

2020 however is poised to be a banner year for animation. There are no sequels or reboots, and any established property that is getting a movie (i.e. Scooby-Doo and Sponge-Bob) is getting a purely original story to add to the ever-growing lore of the character(s).

With Onward, on face value, this is a heartfelt kids movie about two elves trying to bring back their dad. The beats and the style of the film flow pretty much like any other Pixar film you have seen. However, when you peel back that top layer and start to dive into the movie, you begin to understand the parallels with our own life. This movie is about a world of wonder that along the way has lost its magic. I know, or at least I think, there is no real thing as magic in the real world, but the magic this movie is talking about doesn’t have to be performed by wizards or done with a staff, the magic is the wonder of adventure and freedom that people tend to lose when they get older.

Barley Lightfoot, voiced by Chris Pratt, is the only one who still recognizes the sense of adventure and wonder that has been lost for so long. He ties himself to artifacts of the past that are being destroyed, he constantly is playing a board game that closely resembles Dungeons and Dragons, and he is obsessed with quests and magic. However, he seems to be the only one. His brother Ian, voiced by Tom Holland, is lacking in all of the confidence that Barley has. When the two are sent on the quest to recover their dad, it is through Barley that Ian has to learn the wonders of the world.

This sort of brotherly love is what really drives this film along and what makes the ending, while unconventional, strangely satisfying. This film does not give you everything you want but instead shows you what you need throughout. This film was adept at making you feel so hard for these characters. You didn’t have to try to love them, you just naturally did because of how human and honest their story is. Anyone who has ever lost someone, especially at a young age, has this same feeling of longing for them, that if they could just have one more day with them.

That sort of story alone is enough to tug at the heartstrings of anyone, and some of the more subtle and fun moments they had with their dad’s legs are some of the saddest. All this time that was lost for them, and even if they only get a piece of him they are getting the most out of it. It is one of the overall saddest films that I think Pixar has released. Top to bottom, this movie brought me to tears on multiple occasions and for multiple different reasons.

With this being so far into the Pixar “universe” if you want to call it that, or falling under the Pixar brand, there are some cliches that begin to become apparent. The end, while still satisfying, left something more to be desired. Not with what did happen, because I really did enjoy that, but how it happened. It gets to this sort of “in your face” narrative towards the end that might not sit well with some audiences. The plot runs a bit thin as well which could cause some viewers to check out if they aren’t emotionally connected to these brothers and this story.

Final: Onward is the step back in the right direction for Pixar that shows us the magic lost and the wonders it takes to find them. The animation is beautiful, and Chris Pratt and Tom Holland both are excellent breathing life into their characters. The end can be seen as manipulative rather than earned, and the plot runs thin at times, but if you are emotionally connected to the story, those problems become minuscule to the overall effectiveness of this tale of brotherly love.