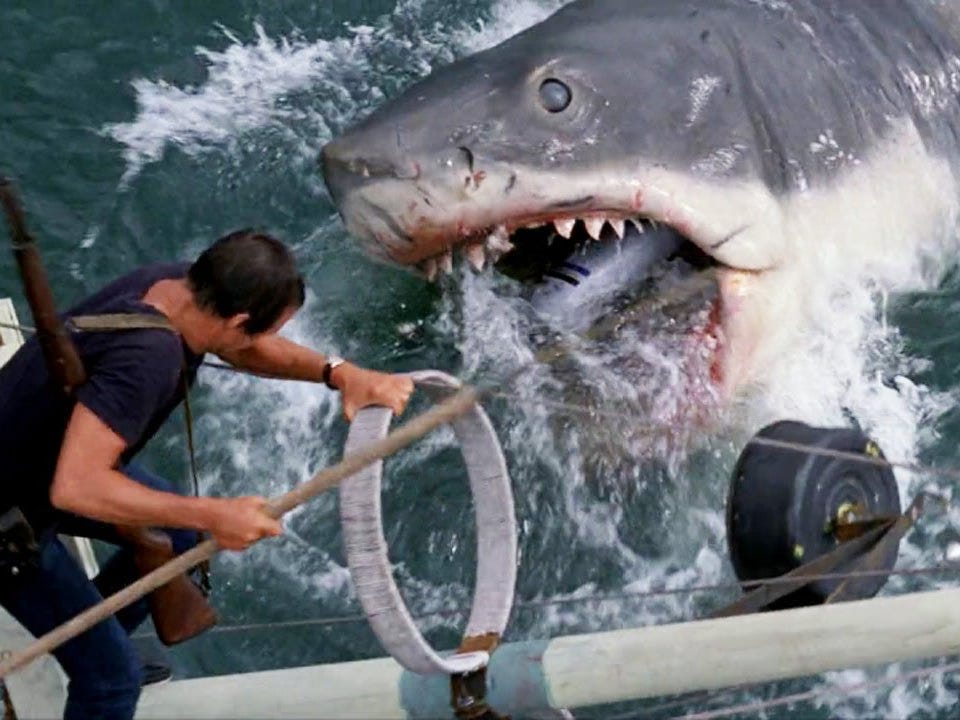 Shark Week kicked off on Sunday and is a week each year when we celebrate our love of sharks and shark stories. My love of shark films began at an early age when I was introduced to Jaws, a film I still watch yearly. But I thought in honor of Shark Week this edition of Binge Watch would highlight a few of the toothy tales that I enjoy watching time and again.

A note here, while some enjoy 47 Meters Down, I am not in that camp. It’s not on this list. Nor is another oft mentioned shark tale, Open Water. While I realize those films have fans, I’m not one of them. So below are six shark movies I think are better.

As always, agree, disagree, have another thought? Comment below or hit me up on Twitter and get the debate started.

6. Sharknado (2013)
About: Here’s the thing, I’m not going to suggest you watch all of these films, but the first one is a classic. I’m not about to tell you it’s good. The effects aren’t great, the acting isn’t great and the story is ridiculous. But it is a phenomenal experience, and that’s what helped spawn a multi-film franchise. We don’t get our yearly installments anymore, and that’s all right, but it doesn’t feel like Shark Week without thinking about Sharknado. Ian Ziering and Tara Reid ham it up here and the ridiculous story is a feat to behold. Sometimes you just want to let go of critical thinking and watch sharks attack, and this delivers on that impulse.
Rating: TV-14

5. Jaws 3-D (1983)
About: This one gets a bum wrap. No film after the original is incredible in the Jaws franchise. The second is basically a lesser re-hash of the original, and the fourth film is actually quite terrible. But this third one, which was indeed made in 3-D with the old red and blue glasses, features Dennis Quaid, Louis Gossett, Jr., and is set in Sea World. I actually quite enjoy this one and have seen it many times. Is it cheesy? You bet it is. But it’s also kind of a new twist and wrinkle as the big shark attacks guests at an amusement park. And Quaid is a great anchor to the action, playing a grown up Mike Brody.
Rating: PG

4. Deep Blue Sea (1999)
About: This one is set at a deep sea research center in the middle of the ocean that used to be a military base. There, the scientists are experimenting with sharks intelligence, because those kind of things never go wrong… This film spawned two sequels, which are skippable. But this first one, it was a big summer release the year I graduated from high school and it was a fun ride. It has a pretty outstanding cast that includes Thomas Jane, L.L. Cool J, Saffron Burrows, Stellan Skarsgård and Samuel L. Jackson. This has some iconic scenes, including a great speech by Jackson that ends with the most iconic moment of the film. The setting and action work, as director Renny Harlin knows his way around a pulse-pounding thrill ride. It’s well worth your time to check out.
Rating: R for graphic shark attacks, and for language.

3. The Meg (2018)
About: This one is about a group of scientists that go too deep and find a Megalodon, the pre-historic shark thought extinct. Instead, it pops up to wreak havoc on a bunch of people, including a crowded beach in China. Jason Statham takes the lead here, and he was born to play in this kind of action-adventure rounded out with some sarcastic humor. This one has a good cast that includes Cliff Curtis and Rainn Wilson and has some pretty kicking action scenes. It was a fun ride a couple summers ago and really holds up well. It’s a great addition to the shark genre.
Rating: PG-13 for action/peril, bloody images and some language.

2. The Shallows (2016)
About: This isn’t your traditional shark film. It’s about a young woman (Blake Lively) who is on a journey through grief and memory in the wake of the death of her mother. As she goes surfing in a secret spot tied to her mother’s memory, she encounters a shark. Then she’s forced to fight to survive. Director Jaume Collet-Serra delivers a stunning, and stunningly emotional tale. I loved the performance from Lively and the way this one was put together. It was one of my favorite films the year it was released and the best shark movie since the one that tops this list. For someone who loves the genre, trust me when I say that’s high praise.
Rating: PG-13 for bloody images, intense sequences of peril, and brief strong language.

1. Jaws (1975)
About: Nothing could possible top this list except the great classic, Jaws. Steven Spielberg’s tale based on Peter Benchley’s novel was the summer blockbuster that started it all, and it’s an iconic classic. This is not only my favorite shark film but one of my Top 10 favorite films of all time. I watch it every summer, usually on the Fourth of July as it’s meant to be seen, and have since I was a young boy. Roy Scheider, Richard Dreyfuss and Robert Shaw are incredible as this film is full of iconic scenes and quotable lines. It’s a can’t miss whether you’re a fan of the genre or just looking for a great time at the movies. Even after 45 years, Jaws is still the king.
Rating: PG