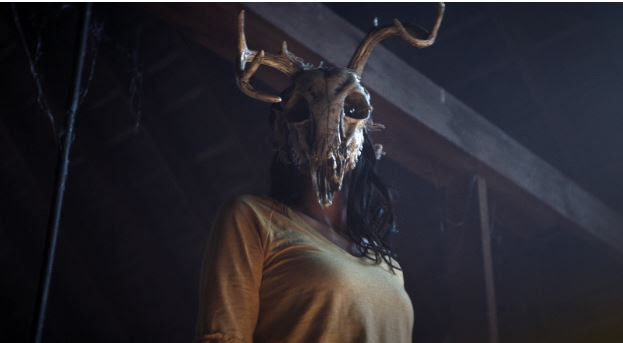 Check out the films being released in 2020 by IFC Films through August!

Directed by The Pierce Brothers

Synopsis: Following his parents’ separation, a rebellious teenage boy, Ben, is sent to live with his father for the summer and work at the local marina in order to gain some form of discipline. The idyllic tourist town offers little solace for him, however, as he is forced to deal with the local, privileged teens and his father’s new girlfriend. Ben’s problems grow increasingly disturbing when he makes a chilling discovery about the family renting the house next door. A malevolent spirit from the woods has taken ahold of the parents and starts playing a sinister game of house, preying upon the children and wiping away any trace of their existence. Ben’s suspicions of the supernatural horrors go unheeded and he launches a perilous crusade in order to put an end to the skin-walking witch’s reign of terror. Chilling and suspenseful, THE WRETCHED offers a modern update to the retro young hero’s mission like that of The Goonies, and promises to make viewers wary of every dark corner they encounter after witnessing its terrifying tale.

HOW TO BUILD A GIRL

Synopsis: Johana Morrigan (Beanie Feldstein) is a bright, quirky, 16-year-old who uses her colorful imagination to regularly escape her humdrum life in Wolverhampton and live out her creative fantasies. Desperate to break free from the overcrowded flat she shares with her four brothers and eccentric parents, she submits an earnestly penned and off-beat music review to a group of self-important indie rock critics at a weekly magazine. Despite being brushed off initially, Johana clamors to the top of the 90s rock music scene by reinventing herself as Dolly Wilde – a venerable, impossible-to-please music critic with an insatiable lust for fame, fortune, and men. It isn’t long before the rapid pace at which Johana’s life is changing becomes overwhelming and she runs face-first into a devastatingly real, existential crisis: Is this the type of girl she wants to become? Or does she need to start over and build again from the ground up? Based on the best-selling novel by Caitlin Moran, How to Build a Girl is a sassy, sexy, and a profoundly touching coming-of-age comedy that traces the rocky road to womanhood through the lens of a unique and wildly hilarious protagonist. Co-starring Alfie Allen, Paddy Considine, Chris O’Dowd, and Emma Thompson.

THE TRIP TO GREECE

Synopsis: Steve Coogan and Rob Brydon reunite in Greece for the fourth AND FINAL installment of THE TRIP series in a delightful odyssey of gut-busting comedy from director Michael Winterbottom.

When Odysseus left Troy it took him ten years to get back to his home in Ithaca. Steve and Rob have only six days on their own personal odyssey in THE TRIP TO GREECE. On the way they argue about tragedy and comedy, astronomy and biology, myth, history, democracy and the meaning of life! Featuring locations such as: Temple of Apollo at Delphi, the Ancient Agora of Athens, the Ancient Theatre of Epidaurus, the unique island of Hydra, the Caves of Diros, Nestor’s Palace, Niokastro Fortress in Pylos, and Ancient Stagira, as well as a lot of shooting in restaurants and hotels in Athens, Hydra, Lesvos, Chalkidiki, Pelion, Kavala, and at the Peloponnese.

Synopsis: BABYTEETH is Shannon Murphy’s (KILLING EVE) powerful, coming-of-age feature debut. When seriously ill teenager Milla (Eliza Scanlen) falls madly in love with small-time drug dealer Moses (Toby Wallace), it’s her parents’ (Essie Davis and Ben Mendelsohn) worst nightmare. But as Milla’s first brush with love brings her a renewed lust for life, traditional morals go out the window, leaving her parents wanting to hold tighter to their little girl. Milla soon teaches everyone in her orbit – her parents, Moses, a sensitive music teacher, a budding child violinist, and a disarmingly honest, pregnant neighbor – how to live like you have nothing to lose. What might have been a disaster for the Finlay family instead leads to letting go and finding grace in the glorious chaos of life. BABYTEETH joyously explores how good it is to be alive and how far we will go for love. BABYTEETH had its World Premiere in competition at the Venice Film Festival in 2019 where actor Toby Wallace won the Marcello Mastroianni Award for Best Young Actor.

Synopsis: Legends of French cinema Catherine Deneuve and Juliette Binoche join masterful filmmaker Hirokazu Koreeda (Shoplifters, Still Walking) to paint a moving portrait of family dynamics in THE TRUTH. Fabienne (Catherine Deneuve) is an aging French movie star who, despite her momentary lapses in memory, remains a venerable force to be reckoned with. Upon the publication of her memoirs, her daughter Lumir (Juliette Binoche) returns to Paris from New York with her husband (Ethan Hawke) and their young daughter to commemorate its release. A sharp and funny battle of wits ensues between the mother-daughter duo, as Lumir takes issue with Fabienne’s rose-colored version of the past. Reflected cleverly by Fabienne’s latest role in a sci-fi drama, their strained relationship takes a poignant journey toward possible reconciliation. Charming, bold, and imbued with endless emotional insight, THE TRUTH offers a relatable look at human relationships, featuring exquisite performances from its all-star cast.

Synopsis: When elderly mother Edna (Robyn Nevin) inexplicably vanishes, her daughter Kay (Emily Mortimer) and granddaughter Sam (Bella Heathcote) rush to their family’s decaying country home, finding clues of her increasing dementia scattered around the house in her absence. After Edna returns just as mysteriously as she disappeared, Kay’s concern that her mother seems unwilling or unable to say where she’s been clashes with Sam’s unabashed enthusiasm to have her grandma back. As Edna’s behavior turns increasingly volatile, both begin to sense that an insidious presence in the house might be taking control of her. With RELIC, first-time writer/director Natalie Erika James crafts an unforgettable new spin on the haunted-house movie.

Synopsis: Based on the acclaimed Jerzy Kosiriski novel, THE PAINTED BIRD is a meticulous 35mm black and white evocation of wild, primitive Eastern Europe at the bloody close of World War II. The film follows the journey of The Boy, entrusted by his persecuted parents to an elderly foster mother. The old woman soon dies and the Boy is on his own, wandering through the countryside, from village to village, farmhouse to farmhouse. As he struggles for survival, The Boy suffers through extraordinary brutality meted out by the ignorant, superstitious peasants and he witnesses the terrifying violence of the efficient, ruthless soldiers, both Russian and German. In a defining scene, one of the peasants shows The Boy the flight of a captive bird, whom the man has painted and then released back into its own flock. The bird is immediately ripped apart because it is different from its fellows. That lesson reinforces all The Boy already knows and will soon know better: difference is fatal. But there are rare moments of compassion: a German soldier spares The Boy, a priest intervenes on his behalf, and finally The Boy becomes the protégé of a Russian sniper, who is kind to the child, but ruthless with the enemy. And there are signs of love. The Boy is seduced by an older girl, finally re-discovering the comfort of intimacy, only to realize that he has been used. When he is miraculously reunited with his weakened father at the end of the war, The Boy is cold and impenetrable, hardened by his ordeal. Yet we can still glimpse something of the old, sensitive Boy behind the eyes of the new. Perhaps there is hope.

Synopsis: Two couples on a lakeside getaway grow suspicious that the host of their seemingly perfect rental house may be spying on them. Before long, what should have been a celebratory weekend trip turns into something far more sinister, as well-kept secrets are exposed and the four old friends come to see each other in a whole new light. Alison Brie, Dan Stevens, Jeremy Allen White, and Sheila Vand star in this unnerving and sophisticated debut thriller from Dave Franco (NEIGHBORS, IF BEALE STREET COULD TALK, THE DISASTER ARTIST).

Synopsis: Alice is a reclusive writer, resigned to a solitary life on the seaside cliffs of Southern England while World War II rages across the channel. When she opens her front door one day to find she’s to adopt a young London evacuee named Frank, she’s resistant. It’s not long, however, before the two realize they have more in common in their pasts than Alice had assumed. Gemma Arterton, Gugu Mbatha-Raw and Tom Courtenay star in this intensely emotional story of love’s endurance in trying times.

Synopsis: Russia, 1983 – Cold War tensions at their peak. A terrifying scene is discovered at the landing site of spacecraft Orbit-4. The commander is dead, the flight engineer in coma. The third crew member, Valery Basov, has survived, but he has lost his memory from the horrific experience and cannot shed light on the cause of the accident. In a secluded government facility, under the vigilant watch of armed guards, psychologist Tatiana Klimova (Oksana Akinshina) must cure the astronaut’s amnesia and unravel the mystery. In the process, she learns that Orbit-4 may have carried back an alien parasite that threatens to consume them all.